You are here: Home / Carnet de voyage / Roadsigns as a peoples heritage

It has been a long time since I wanted to write a piece about the mythical borne d’angle of Michelin. You can still find them here and there along French roads. At first, I thought it was a simple painted concrete structure. The signs actually look like tiles from inside a car. Upon closer investigation, it appears that Michelin used an ingenious technique.

In section: two layers of enamel on lava rock, 15 mm thick and mounted on reinforced concrete. And the surrounding organization was evenly amazing. The production of this road signage by Michelin ran from 1908 to 1971.

You have to give it to the French. Many famous landmarks bear a French signature. The Statue of Liberty, the Panama and Suez Canal, …. André Michelin was one of those industrial geniuses. He promoted travel by car to stimulate his tire production. Those white bornes and the red Guide Michelin were also part of that tourist package.

In 1889 André and Edouard Michelin set up the Michelin & Cie in Clermont-Ferrand (Puy-de-Dôme, 63). Which immediately explains the use of lava rock in the borne d’angle. The lava rock is abundant in the Massif Central due to past volcanic activity in the Auvergne. Even the church of Clermont is completely black! The stone is hard as steel and resists the harshest weather conditions. And it is the perfect host for enamel.

Follow this link to find more photos and details about the whole process: http://www.panneauxenbeton.fr/

In Caseneuve and Gignac there is still a single flat panel at the entrance of the village. Only in Maubec, you can find the only remaining borne d’angle of the Vaucluse (84). Hundreds of tourists pass by car every day without realizing that they saw a piece of patrimony. The local residents are proud and keep the borne up to date. The ‘C’ restored with a sense of typography.

Go see the Michelin borne d’angle at the roundabout at the school in Maubec: 3km to Robion, 3km to Oppède and 0.5km from Maubec ‘City’! 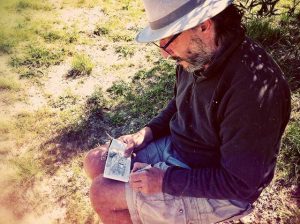